You gotta dig your roots
‘For the sun goes down
Show some love back to your hometown
Fall in love, plant some seeds
Carve some names in the family tree
Raise your kids, love your wife
Put God first, just live your life

It’s the day of the Florida-Georgia Line concert. I spend the morning in my dorm room studying for a daunting biology final. I get ready for the concert. Before I leave I slip on my Birkenstocks (to drive in) and carry my wedges for the concert. I depart from ETSU’s campus and head to Thompson-Boling Arena in Knoxville. 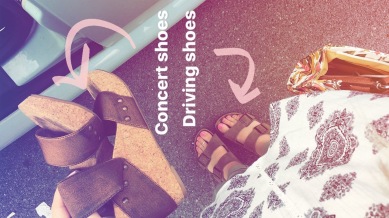 I meet my older sister and younger cousin in a parking garage near Market Square. Once we are in the arena I get my fuel for the night: a Dunkin’ Donuts iced coffee. The man who is working hands me a coffee and water mixture and tells me to stir it. Homeboy that is your job.

The last time I paired a concert with an iced coffee I was wired which is what I am hoping for.

Before Dustin Lynch takes the stage I think of my history of seeing him live:

It was October of 2014 and I was at Maryville’s last annual fall festival. Tim McGraw was headlining *swoon*. I was sitting in the grass, on a blanket, festival-style, with the only boy I had ever loved, who was in Tennessee for a brief weekend; Dustin Lynch’s face was unknown to me but his song “Cowboys and Angels” was familiar and filled the crisp, evening air. Due to my first exposure to his songs live being associated with what felt like a magical time, I was hooked.

I saw Dustin again later down the road: opening for Luke Bryan at Vanderbilt Stadium.

Then again, with no regrets, when I snuck out of a biology night class lecture to see him live at the TN Valley Fair.

And then again, last December at Thompson-Boling. 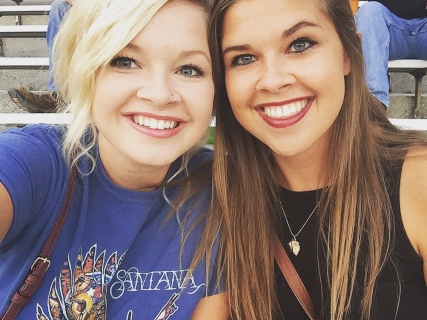 My getaway driver that aided in my escape from Biology lecture. (2015)

The arena becomes dark and the crowd cheers for the moments to come. Dustin Lynch takes the stage, promising to give Knoxville one “Hell of a Night.” He follows by searching for an East Tennessee “Mind Reader.” It’s hard to imagine the Dustin Lynch that was on tour with Tim McGraw three years ago, he has amped up his sex-appeal often making insinuations or promoting romance in the crowd. His innocent, country boy charm is redeemed through the inclusion of his new song that hasn’t been recorded yet: “Love Me or Leave Me.”

“Cowboys and Angels” ushers in something like a kiss-cam on the big screen, flavored with the occasional couple slow dancing. Dustin announces that his parents are in the crowd, he has the crowd serenade them as they continue to dance in the back of the arena.

Two platforms descend from the sky of the arena. Tyler Hubbard is in black attire from head-to-toe featuring a backwards flat-bill; Brian Kelly sports shoulder length hair and hip-western garb. The FGL party begins with “This is How We Roll”; T-Hubb’s Georgia twang is heard: mixtape’s gotta a little Hank, a little Drake…

“This is How We Roll” alone feels like a full cardio workout. I dance and keep up with Tyler Hubbard’s country-rap cross over, somehow managing to improv synced moves for each verse of the song. In step with the previous, the energy continues: “It’z Just What We Do,” “Round Here,” “Anything Goes,” and “Dig Your Roots.”

FGL groove to their new song “Smooth.” T-Hubb invites the crowd to dance and proceeds to show off his hip-hop moves. The Florida-Georgia raised boys may have an inclination for rap/r&b influences but stay true to their southern raising and small town pride during “May We All.”

T-Hubb and BK’s wives are visible on the side stage area. The lights dim, “God, Your Mama, and Me” is introduced with audio of Tyler Hubbard giving thanks for his wife and praying that he could love her as God does; the screen behind rolls a video montage of their weddings and adventures with their wives.

12,000 people at a campfire, county/rap show? Only FGL can pull this off. T-Hubb and BK gather on the campfire stage at the back of the arena. With lights strung between tree props, a white baby-grand piano, a fire-pit, and two wooden stools. Fittingly, “Dirt” precedes the following acoustic snippets on the campfire stage: “Dayum, Baby,” “Sippin’ on Fire,” “Hell Raisin’ Heat of the Summer” and “Here’s to the Good Times.” Before the main stage is reoccupied, T-Hubb sits down at the baby grand and dedicates “H.O.L.Y.” to his wife.

Both halves of the duo take a moment to share statements of sincere gratitude to the crowd for allowing them to live their dreams. But they also state that their personal journeys are what they are most proud of and look forward to continual growth in character, faith and love.

The show is drawing to an end.

In July 2015, FGL performed in Nashville with Luke Bryan. They introduced the beloved hit “Get Your Shine On” and the stadium became illuminated via phone lights from the front row to the nose-bleed seats.

Before the FGL party ends, it gets cranked up to ten, as they would say. They present a high-energy, cover medley for the conclusion of the show: “Ride Wit Me” by Nelly, “Should’ve Been a Cowboy” by Toby Keith, “Last Resort” by Papa Roach, “Everybody (Backstreet’s Back)” by the Backstreet Boys, “This is How We Do It” by Montell Jordan, and “Jump Around” by House of Pain.

Here’s to the good times!!

Gotta be a rain or shine concert-goer to hang with the #cmafest this year 🌟
Golden moments with @spaceykacey 🌎🌈✨ High Horse > Velvet Elvis > Space Cowboy
Who’s ready to spend too much on the #jonasbrothers reunion tour? 🙋🏼‍♀️ — these gems were taken nine years ago on the ‘Lines, Vines and Trying Times’ tour!
@drakebell’s acoustic set is now on the Concert Diary! #linkinbio
TWO YEAR ANNIVERSARY: The concerts I’ll go to, I’ll take you with me. Two years behind us, hello year THREE.
Kacey Musgraves won big on the Grammy stage for her magical album “Golden Hour.” Coming soon to the Concert Diary: Musgraves’ Oh, What a World Tour. 🌈🌸🍄✨
Known to induce a modern-day Beatlemania following, Styles has risen past the ranks of boy band favorite and solidified himself as a rockstar. Celebrate his birthday with a taste of his live show on the Concert Diary. | #linkinbio #harrystyles
We love quirky venues with personality. 🤩